Just now
A star will unwind itself upon the horizon
Just then
Its winking will beckon to your heart
A memory
A tale of separation
Something not done
An unfulfilled dream
Something not said
To someone!

We should have met
In an age of gracefulness
In another heaven
In a different country!

In our country
A woman who writes poetry is considered a curiosity
Every man fancies himself as the addressed
And since in actuality it is not so
He becomes her enemy!

As such Sara Shagufta
Made few enemies:
Before she could marry a writer
She had already become the sister in-law of them all
Because she did not believe
In offering expletives
Every Tom, Dick and Harry claimed
She had slept with him
From dawn to dusk
Every unemployed hack-writer in the city
Bumbled around her
Even those
Who had jobs to go to
Would leave their tatty files and worn-out wives
And let her play in their hands
(Oblivious of electricity bills, children’s school fees and the wife’s medicine
For these were concerns
Of the lesser mortals)
All day long
All evening
So late into the night,
Incensed talk would ensue on literature and philosophy
When hunger struck
They’d all chip in and order
Bread and boiled pulse from the shack round the corner
Great dignitaries would then be offered tea
At her expense
They told her she Pakistan’s answer to Amrita Pritam
Stupid gullible girl
She fell for it
Perhaps also because
Those responsible for her bread and butter
Always served her Kafka for tea
With Neruda biscuits
She survived
Their drooling Compliments
But how long for
One day or other she would’ve had to escape this panther prowl and these flattering
Connoisseurs of art
She had been nibbled away alive by
Sara went one step further and left the jungle itself!
In their symposiums
They still drool at her name
Except they can no longer eat her
For in death they have relegated her
To the status of Tomato Ketchup!

A Poem of Maturity

Sobbing like a child he insisted
That they bury him alive with his dead wife
The lads nudged and winked
At each other
The elderly said ‘He has gone mad’
And the priests had a hard time dragging him back home!

Routinely he would go to Mewashah after work
Carrying flowers and incense candles
Then he would go every Thursday
Then every ninth day
Then on the 2 Eids, and then every Shab-barat
Then annually
Till one day he alighted from the number 60 bus
Into the scorching sun
And his eyes settled upon a tree
As he remembered
The new typist who’d arrived at the office that day
He laughed
Realising that the world
Does not consist of one person alone

The face of a 12-13 year old child
Peeping from behind thin curtains
Fresh as the first
Flower of spring
As pure as
First love!
But the hands wrecked from too much
Cutting of vegetables
And those cuts embroidered
With dry sand
Hands 20 years older
Than the face

Advice from a Senior Executive

The Senior Executive where I work
Called me rather unusually to his office one day
Frowning uneasily he asked after a couple of files –
And my non-civil pastimes
Then shed light upon the standing of a poet in society
The gist of what he said
Was that a poet has the same role in a nation
As an appendix in our bodies
Absolutely Useless but able at times to cause great pain
So there is only one way of getting rid of it – Surgery!
A feint smile played upon his lips, as he imagined he had rid himself
Of the appendix of my personality
Then said
‘An ideal consultant
Has no face
First lips disappear
Then eyes
Followed ears
Until finally poets lose their heads
Without loss of lips, eyes, ears and brains
Nobody can become, a Federal Secretary!’

To further enhance his argument he referred to couple of barmy diplomats
But I think he must’ve read my mind or facial expressions
That this fool is content merely to remain a Local poet
Disheartened he permitted me
To take my leave for the day
And I the fool returned to my office
Having found inspiration for a new poem
Well aware of a possible entry in red ink
In my A.C.R.* 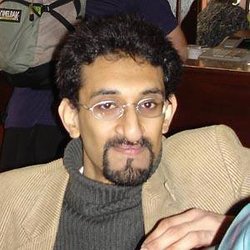 Rehan Qayoom is a poet of English and Urdu, editor, translator and archivist, educated at Birkbeck College, University of London. He has featured in numerous literary publications and performed his work internationally.  He is the author of About Time and other books.